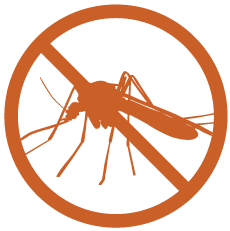 Mosquito repellents can be an effective method for personal protection against mosquito bites that are a nuisance and carry the risk of transmission of mosquito-borne pathogens like plasmodia , dengue virus, chikungunya virus, and Zika virus. A multitude of commercially available products are currently on the market, some of them highly effective while others have low or no efficacy. Many home remedies of unknown efficacy are also widely used. The most commonly used repellent was DEET spray (48%), followed closely by citronella candles (43%) and ‘natural’ repellent sprays (36%). History of insect repellentsThe use of insect repellent compounds dates back to antiquity, when various plant oils, smokes, tars, etc. were used to displace or kill insects. Before the Second WorldWar, there were only four principal repellents: oil of citronella, sometimes used as a hair dressing for head lice, dimethyl phthalate, discovered in 1929, Indalone®, which was patented in 1937 and Rutgers 612, which became available in 1939. At the outbreak of World War II, the latter three components were combined into a formulation for use by the military known as 6-2-2; six parts dimethylphthalate, two parts Indalone and two parts Rutgers 612. Other military repellent formulae for use on clothing were developed during the war, but they all failed to provide desired protection of military personnel deployed around the world. As a result, by 1956 the United States government had screened over 20,000 potential mosquito repellent compounds. In 1953, the insect repellent properties of N,N-diethyl-m-toluamide (DEET) were discovered and the first DEET product was introduced in 1956. DEET is still the most widely used mosquito repellent. It has generally been regarded as safe, but toxic effects have been recorded, including encephalopathy in children, urticaria syndrome, anaphylaxis, hypotension and decreased heart rate.

Natural ingredients are included in some formulations of insect repellents. Of 65 formulations of non-US-produced insect repellents, 33 contained DEET and the remainder contained natural oils (Schreck and Leonhardt, 1991). Of 901 substances (872 synthetics and 29 botanical oils) tested for repellency to four species of domiciliary cockroaches by the US Department of Agriculture (USDA) between 1953 and 1974, 127 repelled 94% or more of the German cockroaches, 61 repelled 100% and 13 repelled 100% of all four species tested. None of those 13 was a botanical extract, but many were analogs of natural products. 1,4-Naphthoquinone has many substituted forms that occur innature (such as vitamin K). Klun et al. (2000) found that Anopheles mosquitoes were differentially repelled by isomers of some piperidines.

Citronella is a popular botanical ingredient in insect repellent formulations. Candles and incense containing oil of citronella are sold as insect repellents. The insecticidal properties of this oil were discovered in 1901, and it was used for a time as a hair dressing for the control of fleas and lice. Few studies have been undertaken to evaluate the efficacy of such products. Despite popular conception, Lindsay et al. (1996) reported that citronella candles or incense were ineffective for reducing the biting pressure of mosquitoes. It was found that burning an unscented candle had the same effects on reducing the biting rate of mosquitoes in the field as a citronella candle.

Neem oil, from Azadirachta indica, when formulated as 2% in coconut oil, provided complete protection (i.e. no confirmed bites) for 12 hours from Anopheles mosquitoes(Sharma et al., 1993). A neem extract proprietary product, AG1000, has been shown to be repellent to the biting midge Culicoides imicola, which can spread cattle diseases(Braverman et al., 1999).

Quwenling, a popular Eucalyptus-based repellent product, contains a mixture of p-menthane-3,8-diol (PMD), isopulegone and citronellol. Quwenling has largely replaced dimethyl phthalate as the insect repellent of choice in China(Trigg, 1996). Eucalyptus oil itself, the principal ingredient of which is PMD, provided protection comparable to DEET in repelling Anopheles mosquitoes in field studies (Trigg,1996). Although repellent to Culicoides impunctatus, Eucalyptus oil was attractive to C. imicola (Braverman etal., 1999).

Plant-based repellents have been used for generations in traditional practice as a personal protection measure against host-seeking mosquitoes. Knowledge on traditional repellent plants obtained through ethnobotanical surveys, is a valuable resource for the development of new natural products. An attempt has been made to prepare herbal formulations from natural products of RE - ER such as flowers, leaves and whole plants of traditional thai herbs. These thai plant oils and dry leaves as well as whole part may represent an alternative in formulating potent thai natural products in the control of mosquitoes and other insects. Moreover, RE - ER mosquitoes & insects repellent has skin smoothening property it can keep skin moisturized.

Availability, choice, use, and effectiveness of repellents and other mosquito avoidance strategies are also important variables for mathematical models predicting mosquito-borne disease dynamics. The concept of ‘One Heath’ integrates human, animal and environmental health. This multidisciplinary approach is relevant for veterinarians, ecologists, biologists, and others to understand and predict the spread of disease among people, animals, and within the environment (Destoumieux-Garzón et al., 2018). One Health approaches will benefit from solid knowledge on local repellent use, and its efficacy. Thus, knowing how different people in different regions defend themselves against mosquitos, and knowing the efficacy of these methods, can be combined with other data to contribute to disease outbreak predictions (Benelli & Duggan, 2018).